Indietracks 2012 was my first experience of the “indiepop at a heritage railway” festival and, for reason that should become obvious, it is unlikely to be my last.

Arriving at the campsite, independent from but close to the festival itself, I was a little concerned as the rain bucketed down upon us. The rain soon stopped and sun returned, a sign of things to come with sun primarily dominating the periodical heavy showers over the weekend. Arriving at the festival site itself, the charming Midland Railway Centre, we found that the bands had been driven inside by the inclement weather and would play on the second stage in the cavernous train shed. 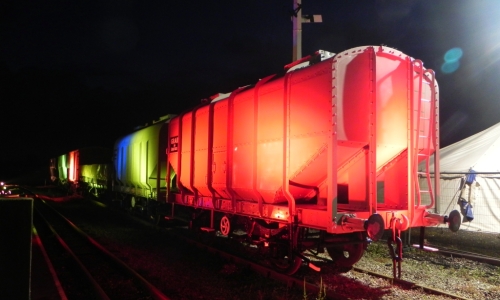 The first night of music was limited to just three acts, but it proved to be a pretty satisfying evening’s entertainment none the less. First up were The Smittens, a technicolor blast of cheerful pop from Vermont. Sitting somewhere between Architecture In Helsinki and The Magnetic Fields they put on a good show and open the festival in an appropriately quirky manner. Next up The School set a high bar for the most members in a band with their sweet vocals and soulful 60s pop sound. Belle and Sebastian are a clear influence, or at least the band are coming from a similar musical place.

Finishing the night, and turning in one of the sets of the festival, saw Darren Hayman and the Long Parliament turn in a crowd pleasing mixture of new and old favourites. A new line-up sees Allo Darlin’s Bill Botting move to guitar,  Tigercat’s Giles added on bass and the addition of a keyboard and harmonium player. This backing band could well be the best in his career and the songs, including a version of The Bee Gees ‘I Started A Joke’, sounded brilliant throughout. A closing version of Hefner favourite ‘Painting and Kissing’ goes down a storm and sees Hayman hammering his guitar during the extended outro. 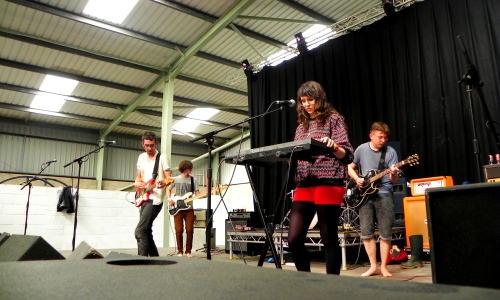 Day two saw the standard pattern begin in earnest as we flitted between the outdoor stage and the train shed to catch the best of the acts. First up outside was the pleasant, if a little generic, pop of The Birthday Kiss. They suffered, as most outdoor acts did, from a smaller crowd as people prepared for rain and headed inside to the guaranteed dry safety of the train shed. (One suggestion for the organisers would be a beer tent near the outdoor stage to encourage people to stay there even if the clouds threatened). First act inside was more interesting as Vacaciones brought an energetic punkiness to their sweet Spanish pop tunes. Flitting back outside we caught a little of the Evans the Death set, a band that impressed me a lot more live than they had done on record.

The outdoor music was cut short as we decided to catch the next round trip on the steam train (free to all festival goers). This proved to be a relaxed and picturesque experienced and meant we got to catch one of the train carriage gigs happening throughout the weekend.  Marc Elston‘s  brand of acoustic songs may not be anything new but it sounded pretty good played to a toddler heavy audience in one of the moist unique festival venues.

Back on stationary ground we headed to the front of the shed to see if Tigercats could live up to the high expectations their debut album had created. They didn’t disappoint turning in a really confident and energetic set which included the bulk of the album. The strong tunes and interesting arrangements supported by a great rhythm section including the best drumming performance of the weekend.

A detour as we crossed the site ended up with a guided tour of the narrow gauge rail shed by one of the Midland Railway staff. It was interesting to find out about the trains, but also to see what a partnership between the Indietrack’s team and the centre staff the festival was. Something that may go a long way to explaining the excellent atmosphere at the festival. He really seemed to enjoy having the festival saying “We are in our 6th year and we are just about getting the hang of it.” adding “We have never had any trouble, except once when a local wandered up the track.”

Returning to the music (via the Burrito van – some of the best festival food I have ever eaten) we made our way to the stage to see one of my most anticipated acts of the festival, Go Sailor. Go sailor are one of those bands that most people will never hear, but are a firm favourite with those that know them. Lead by Rose Melberg (more on whom later) they play a pure high energy guitar pop that is the sound of happiness, despite the bittersweet lyrics. The crowd should be bigger but again the rain comes and people (those without umbrellas at least) are sheltered in the shed. 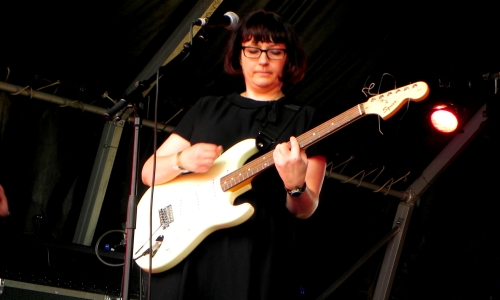 Later in the shed comes the first real disappointment of the festival as Summer Camp fail to live up to the hype. Their whole sound seems too slick and too studied, lacking any innocence or authentic enthusiasm. Reports suggest that the second half of the set was better than the first, but by this time we are enjoying a drink in the train carriage bar and it passes me by. (At this point it is worth mentioning what good value drink was at the festival, and snacks as well. You never felt that you were being fleeced at any point on site)

Headliners Veronica Falls do a better job and it is nice to see a big crowd at the outdoor stage as the sun descends. They walk a neat line between upbeat and dour and it is a reminder to me to check out their album when I get home.

Day three proves to be the most varied and eclectic mix of the weekend. It is apparent though that what a loty of acts have in common, be it the endearing noise of The Spook School or the pitch perfect vocals of The 10p Mixes, is a DIY ethos that reminds me of the first wave of punk. If you can’t guarantee money from music sales then you can generate a fan base by handing out handmade CDs to the crowd. 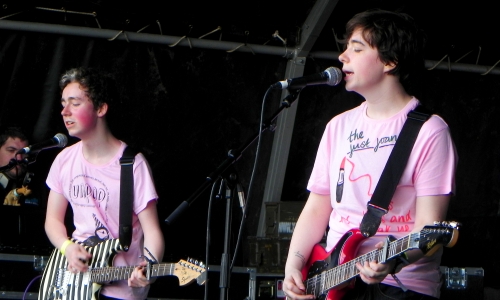 The rest of the day is dominated by indie veterans who set a pretty high standard for the younger acts. Brighton C86 survivors 14 Iced Bears prove to be the latest victims of the rain adjusted crowd syndrome but their melodic psychedelia sounds pretty good to those that stick it out. Stevie Jackson also suffers from the opening clouds but does a better job of keeping hold of the crowd. He plays an engagingly eclectic set that moves from pop to blues to an appropriate cover of Dillard and Clark’s ‘Train Leaves here This Morning’. His song sounding much better freed from the shadow of Stuart Murdoch on the Belle and Sebastian records.

Super stylish surf pop from Seattle residents Orca Team takes a little while to warm up the crowd in the train shed. By the end of the set it seems clear that this is one of the bands to watch from the festival and they might turn in to something that little bit special in time. One band that seems fully formed, at the busiest outdoor daytime show of the festival, is Allo Darlin’. With two excellent albums to draw from they move from pop gem to pop gem for the partisan crowd. With a rock solid rhythm section (including the engagingly bouncy Bill Botting), a fantastic lead guitarist and a front-woman with real star quality they are the “band most likely to” on the bill.

Sadly I have to cut their set short to make sure of space in the church to watch Rose Melberg play a solo set. It proves to be worth it though as she turns in the performance of the festival to the hushed and attentive crowd. Her voice is sweet and gentle and the songs sad and lyrical, perfect for the setting. She is also the second act of the day to cover Kirsty MacColl’s excellent ‘They Don’t Know’, which sounds pretty lovely both times. I head to the merchandise tent after the set to pick up one of her solo albums to find the WIAIWYA record boss still wiping tears away from her set, I doubt you see that with major label bosses (who are also unlikely to man the merchandise stall). 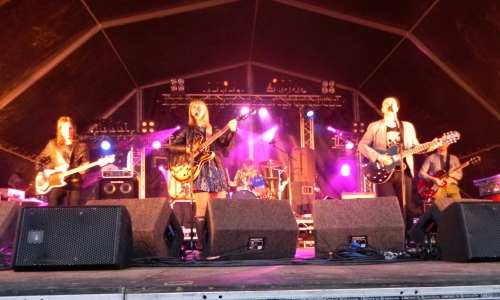 Finishing the festival off in irreverent style is Kurt Cobain favourites The Vaselines, a band who recently returned after a 20 year hiatus. The banter between Eugene Kelly and the filthy mouthed Frances McKee (who offers herself up to the crowd and claims to have given Jesus a blow-job the previous night) is very entertaining, as is there messy alt-rock sound. Supported by some excellent guitar (supplied by Stevie Jackson) they rip through a bit proportion of their small back catalogue. They also prove Kurt Cobain right, ‘Son of a Gun’ is just a brilliant piece of music.

There are a dozen reasons to recommend the festival to anyone but the most indie averse music fan. The interesting setting, the variety of stages, the friendly reception from the railway staff and volunteers and the cheap and plentiful beer on offer. It really is a unique musical event and I hope it continues on in the same vein for years to come. With so many festivals struggling it is important that a few truly independent festivals survive, we don’t end up with bore-fests like Isle of Wight as the only options.

As we stand by the road waiting for our taxi back to the station a car pulls up, “I hope you enjoyed your weekend lads, come back and see us again next year” says the old boy behind the wheel. I bet you don’t get that when you leave V Festival.

Words and pictures by Dorian Rogers

See more pictures from the festival in our Flickr gallery.

Read our review of the 2011 Indietracks festival.