After Robert Pollard disbanded Guided By Voices first time around we lost one of the great rock bands. Pollard continued to produce music in a variety of guises, mainly solo and with the Circus Devils, but nothing that fitted into that classic rock band mould. It was therefore an exciting time when he announced the formation of Boston Spaceships, named after his own nick-name for his favourite doughnut, with Chris Slusarenko and Jicks and Decemberists drummer John Moen. Between 2008 and 2011 they released five brilliant albums before suddenly splitting up after the release of 2011’s best album Let It Beard.

None of these albums got official UK releases which makes Fire Record’s best of collection, Out Of The Universe By Sundown, more exciting than most greatest hits collections. 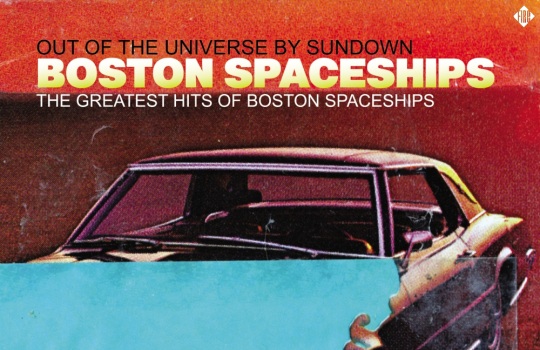 With a collection of songs by a band it is easy to focus on what isn’t featured, and some of my favourites songs don’t make the cut. I’d have included ‘Chevy Marigold’, ‘Psych Threat’ and half a dozen other tracks on my own collection, but a single CD set of 15 songs isn’t going to have every brilliant track included. What is harder to do is argue against the inclusion of any of the songs that feature here. From the pop brilliance of ‘You Satisfy Me’, from their debut, through to  ‘Tourist UFO’ from their swansong (complete with an epic J Mascis guitar solo) their is not one duff track featured.

This collection is proof, if proof were needed, that Boston Spaceships were up their with Guided By Voices as one of the great bands of Pollard’s erratic and esoteric career. You only have to look at the guest guitarists that he managed to attract through their career (Chris Funk, Gary Jarman, Peter Buck, Colin Newman, Dave Rick and Steve Wynn among them) to see that this was not one of his throwaway side projects; this was the real deal. Listen to ‘Let It Rest For A Little While’, from Zero To 99, and you’ll hear the best track that Peter Buck played on for most of the decade.

The quality of songs here is complimented by the quality of the playing on show, Slusarenko is a hugely talented multi-instrumentalist and John  Moen is one of the best drummers around today. Add that to the guests across the albums and some of the best performances of Pollard’s career and you have a pretty classic combination.

This album is not one for fans or collectors, there are no demos, live tracks, unreleased songs or b-sides. What you get is a selection of  15 songs from one of the best bands of the 21st century hand picked by Robert Pollard himself. I’m not an entirely impartial voice, I make no secret of how much I love Robert Pollard’s work, but I can tell the difference between his good and bad releases. I’d never encourage anyone to buy the largely awful ‘Superman Was A Rocker’ collection for example. What I can do is unreservedly recommend this album to anyone who wants to hear a set that demonstrates just how good guitar music can be.