North Sea Scrolls is an album that brings together two celebrated musical grumps*, Luke Haines and Cathal Coughlan, along with journalist Andrew Mueller to create an alternative history of the British Isles. (*this isn’t the word that I was originally going to use but after watching Art Will Save The World last night I’m studiously avoiding the use of the “M” word). 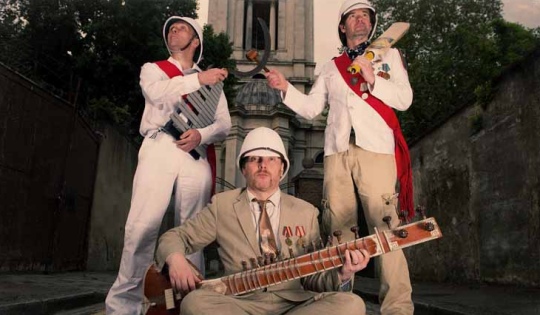 The album is based around the information from the scrolls that have been discovered offering a new view on our history, excerpts of which are read out by Mueller between the songs. Among the concepts featured are the ritualistic sacrifice of Chris Evans, Joe meek as the Minister of Culture, Enoch Powell as Poet Laureate and Ian Ball, the kidnapper of Princess Anne, having a crisis of identity in Broadmoor about Ian Ball the singer from Gomez.

The album is split equally between songs by Haines and Coughlan, and despite having very different styles they sit nicely together across the album. The arrangements are simple, mainly guitar and vocals or piano and vocals, with some additional cello on some numbers. This lets the songs do the talking, with the distinctive vocals and off-kilter lyrics making the absurd concepts believable and amusing all at once.

The album is presented twice, once with just the songs and Mueller’s intro and outro pieces and additionally with his readings from the scrolls presented before each song. This is a wise move as it gives the album a longer lifespan for most listeners. Whilst it is very much worth listening to the full concept first, at least a few times through, you’ll find yourself just wanting to listen to the songs after a while.

2012 has already presented one of the most thoughtful concept albums that I have heard in years, Darren Hayman’s The Violence and North Sea Scrolls matches that album in terms of conceptual inventiveness. Neither album would score as highly if all they had was an interesting concept, what Haines and Coughlan have in common with Hayman is intelligent lyrics, distinctive voices and way with melody.

This is likely to be a marmite album, obscure references (I had to Google a lot of people mentioned) and acidic delivery isn’t going to be to everyone’s taste. Even some of those who like Haines’ work may struggle with Coughlan’s Scott Walker style delivery and vice verse  However if, like me, you see the brilliance in both you will find that November has delivered one of the best albums of the year and unquestionably one of the most unusual.