Like the opening of a Bond film, Storeys takes you straight into the action from the the first track, Believe Me Richard, a rollicking car chase of a song that’s jam packed full of melody and even finds time for a quick Beatles tribute. 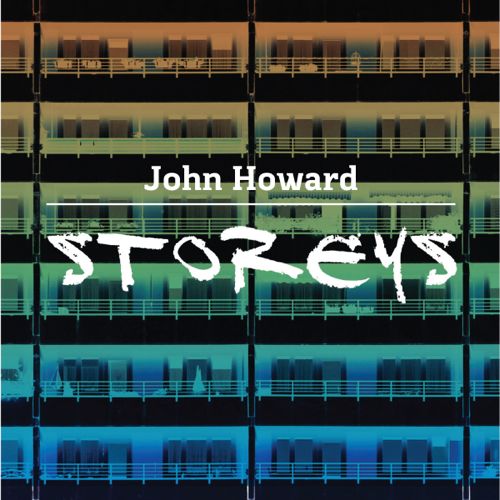 And so begins the latest in a  musical career  for John Howard in two acts. The first, started in the folk clubs of Greater Manchester and London in the early 1970s from where he was signed and later dumped by CBS. The final heartbreaking scene was his piano lid closing as he walked off into a career in music A&R.

The second is much more on his terms and started ten years ago after being brought out of his songwriting hibernation by renewed interest from a younger, online and social media savvy audience.

Revitalised by these new fans he has been churning out some of the best music of his career  during the second act of the John Howard story, from lovely melodic pop to sweeping Brian Wilson-esque sound scapes.

On what is now his 12th studio album we find Howard still in reflective mood, still bringing in his personal memories into the lyrics but mainly focusing here on different lives, specifically of 12 people living in an imaginary apartment block.

His press release tells us that the concept is a bit like “Rear window, we see their lives unfold before us through the windows of the 12 songs.  As with all my story-songs the lyrics are a mixture of personal experiences, situations told to one by friends and also scenarieos culled from he imagination.”

Among the most heartfelt of those characters is the protagonist in Permanently Temporary, remembering a relationship with such clarity it’s like the listener was there.

Another of note is Siblings, which at almost eight minutes  is a sweeping epic song full of twists and turns and all anchored by some fine piano playing. It starts off dark, full of catholic references to death and guilt before this almighty broadway-esque chorus rises resplendent. And what a chorus it is, in a normal three minute format it would be good but saddled here among the Catholic darkness it is extra special.

Across the tracks there’s a real sense of timelessness from an artist who was learning his craft more than 40 years ago and still has the keenest sense of what makes a good song in this new age of home recording, self marketing and online promotion.

I won’t comment on all the songs. But one extra track I’m keen to mention is Right Here, Right Now. The title of this three minute gem seems to sum him up perfectly, as he emerges from the past to be a man very much of the present, influencing and playing alongside other generations of musicians, such as Darren Hayman, Robert Rotifer and Ralegh Long.

He has already contributed to a solo album from Hayman as well as tracks for a sampler for the new label Gare Du Nord that has been started by Rotifer, Long and former Death in Vegas man Ian Button. In addition, Howard will be playing a rare London gig supporting Ralegh Long at The Servants Jazz Quarters on 27 November.

Click here to read our feature on John Howard.