As with our last trip to Indietracks we underappreciated the length of the journey from the south coast up to Derbyshire. Traffic jams for most of the route meant that by the time we’d pitched tent and set up for the evening that we’d already missed one of the three acts playing on the first evening. 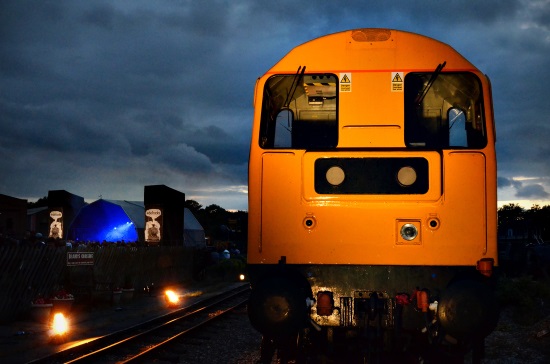 Simon Love was in full flow at Indietracks Festival 2016 when we arrived on site, in the midst of a set heavy on tracks from his most recent album. Love does seem a little distracted, but puts on a  good show replete in white suit shirt and tie. It’s an irreverent, fun, and slightly shambolic set to start the weekend. 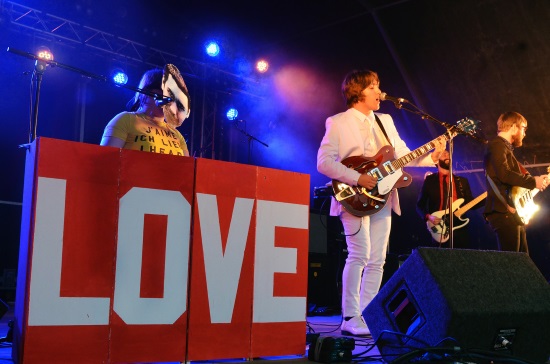 The Spook School have established themselves as Indietracks’ stalwarts since I first saw them play way back in 2012. They are as engaging as ever, although the many distractions of the site see me moving from shed to train to bar and back during their set. They’re an intriguing band with a lot to say, quietly spoken between songs and outspoken within them. Although they’re sound is primarily spiky pop punk there is a real variety to the mood. Some songs are really pretty downbeat, but that doesn’t stop them playing ‘The Vengabus is Coming’ as an encore. 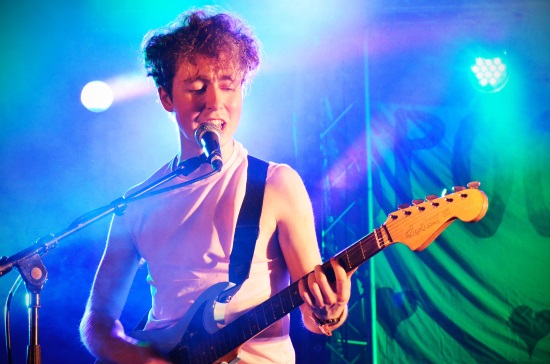 The first full day starts wearily; we camped far too close to the disco tent. Sleeping through a rowdy singalong of ‘The Hymn for the Cigarettes’ isn’t possible. A midday walk around the site followed by an invigorating ride on the miniature railway sweeps some of the cobwebs away. 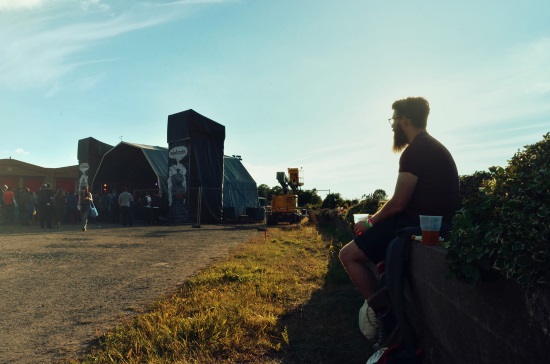 Dirtygirl start things off in an “interesting” way, they are pretty ramshackle and don’t seem quite ready. There is a rawness to the band that I appreciate and an honesty to their songs, it isn’t for me. Vaccaciones from Spain are more like it, but also pretty ramshackle I have no idea what they are singing about but I like the sound of it and their senthusiasm seems to drag some sun from between the clouds.

In the Church Wintergreen get an immediate few marks on the obscure instrument bingo-sheet by having an Autoharp and harmonium on show. The bands start is delayed by a lot of tweaking to their set-up, and more endearingly by their violin player still being on the train. Indeed with harmonium and melodic also on the stage they are close to a full house. The band sound pretty good and remind me of a more classically English Efterklang. The only problem is that even with the extended set-up they don’t seem t be able to get the sound set-up quite right. The set breaks down half way through and the band do start to lose the audience a little. One to revisit on record I think. 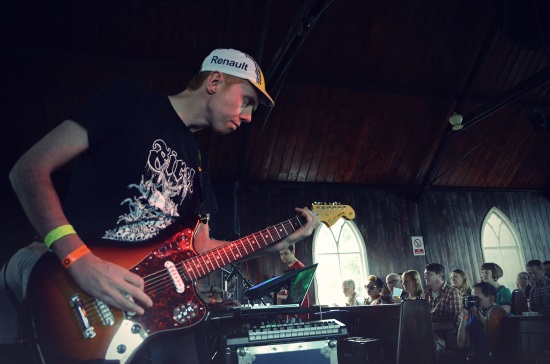 Emma Pollock on the other hand gets the sound rust right for her early evening set. The songs from her excellent new album, In Search of Harperfield, sound appropriately punchier live and it proves to be one of the sets of the weekend. Great songs and years of live experience prove to be the magic combination here. 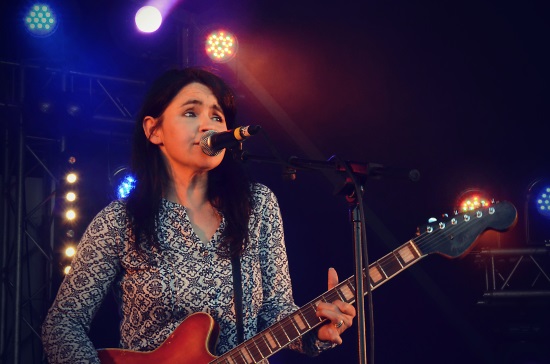 Although Saint Etienne are the official headliners it is obvious that The Lovely Eggs are the band that the Indietracks crowd want to see most. The crowd is huge and rightly enthusiastic about the duo’s set, They play a nicely dirty take on indie pop punk and the audience goes wild. 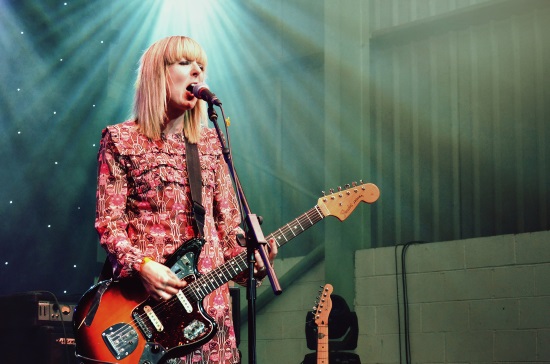 Even though the outdoor crowd is always a bit less rowdy than they are in the train shed, they seem pretty excited about Saint Etienne. They play a pretty great set high on hits, a well chosen selection of album tracks and not too many new songs. There is a lot of comfortable cosiness about them these days, but they are still a pretty great pop band and a fitting end to the day. 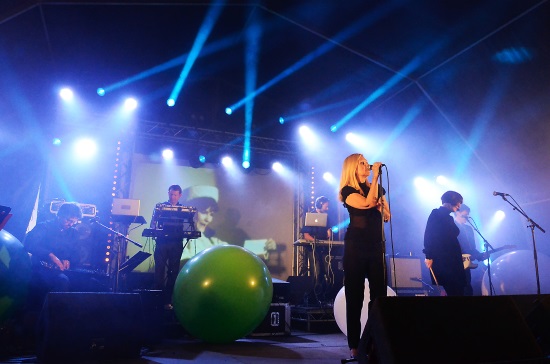 Due to the unusually dry weather Indietracks 2016 for me is all be about the open air. So after a brief watch of City Yelps we head out again to get a seat on the grass for Witching Waves. The band play a fairly typical indie punk set, but there is thing wrong with that. They have some really good tunes and their on-stage nervousness is endearing. Wanderlust hits again halfway through the set though as we head for our (only) train based gig. Sadly we don’t get to see the band as some people (cheats!) were already on board and it fills up sooner than promised. Our photographer did get a place so he enjoyed Gavin Osborn and the rest of us had a pleasant train ride. The report came back that he was pretty brilliant, so one to catch in the future. 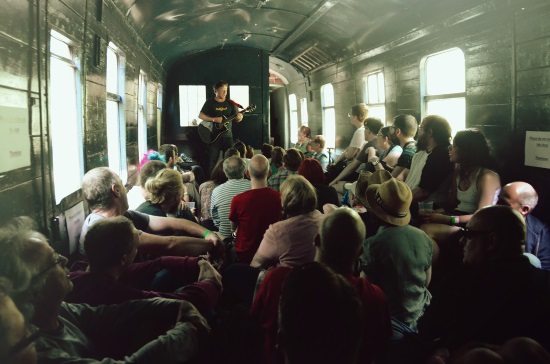 The Charlie Tipper Conspiracy have nice instrumentation and arrangements but a tendency to be rather dreary, a lot of which is down to the slightly flat vocal style. We go to watch Girl Ray as part of a rare venture indoors and well worth it. Tuneful vocals and catchy tunes are what I’m looking for and they deliver that perfectly.

Back in our place on the grass Haiku Salut seem perfect in the late afternoon and have a very strong sound. The second time Efterklang have come to mind this weekend, plus a bit of the Yann Tierson thrown in. No festival singalongs here but some very beautiful atmospheric music (Possibly the prize for most instrument changes also).

Darren Hayman arrives on stage in power trio format and takes no time to pillory Bill Botting for forgetting a bass strap. It is a well structured festival set and Hefner make an appearance as early as song 2. It is beautiful stuff with a number of recent songs from the  Thankful Villages and Chants for Socialists albums. A sore throat seems to cause Hayman a few problems but performing ‘The Hymn For The Cigarettes’ as the last song shows he knows how to play a festival. 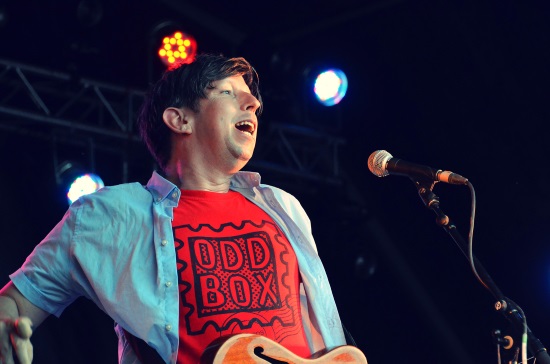 I remember Comet Gain but don’t really remember their music, and noting in their set sounds familiar to me. I really like the overall sound, but I struggle to really get into the set without any familiar reference points. 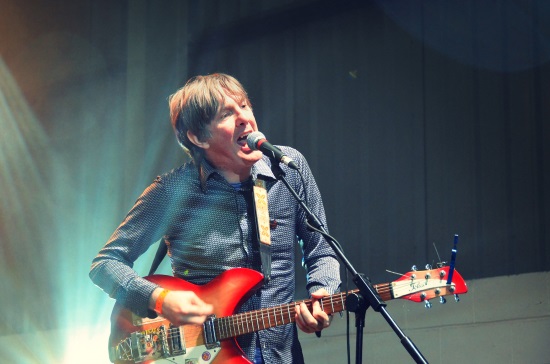 Watching the last steamroller can crush of the weekend and stroking the tiny owl do mean arriving late for The Aislers Set. They’re another band I know little of, but I can tell they are a band I would have loved if I had discovered them first time around. It would have been nice to have had a band I was a fan of finishing the weekend, and you can’t fake that feeling.  But on the night they sound pretty great and seem like a pretty decent Indietracks finale. 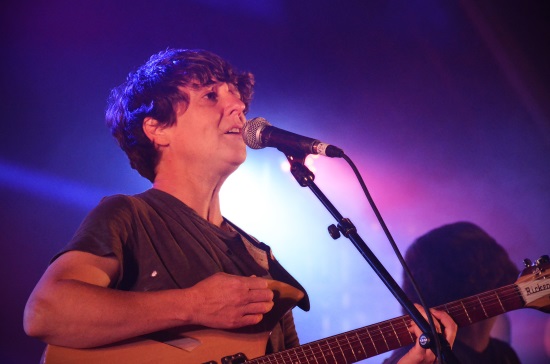 So ten down and hopefully many more to come. There is nothing quite like Indietracks and it still holds the prize for being the friendliest and most relaxed musical event of the year.